This historic project complements and is located adjacent to the SEA Memorial Pavilion. Funded and constructed by the Class of 1970, the plaza includes an open area for promotions, retirements, cadet classes and small reunion events. Most importantly, it memorializes the courageous valor of graduates. The centerpiece of the Plaza is the North wall and a sculpture of the Academy’s only Medal of Honor recipient—Lance Sijan. Lance’s classmates in the Class of 1965 funded the North Wall and the sculpture. The Plaza also recognizes graduates who earned the Air Force Cross, Silver Star, Purple Heart, and other distinguished combat awards.

Plaza Of Heroes - A Monument to Valor

Flew secret missions from a remote airstrip in Laos. As a Raven Forward Air Controller, he flew the unarmed O-1 Birddog.

After being shot-down and faced with surrendering or survival, he held off two enemy companies with his rifle, pistol, and hand grenades while severely wounded before being killed in the firefight.

Many believe Richter was the best fighter pilot in the war.

Only Air Force pilot to shoot down five Mig 21’s.

Flew over 300 combat missions during two tours in Vietnam.

One of the most decorated Air Force fighter pilots in history.

Volunteered to be lead Jolly Green flight for the rescue of Captain Roger Locher deep in North Vietnam territory.

It is considered one of the most remarkable rescue missions of the war.

Flying the unarmed O-2 aircraft, he repeatedly flew through heavy ground fire to protect a special forces camp from being overrun.

During the four hour battle, his selfless courageous actions, including firing his carbine out the window, frustrated the attack on the camp and saved many lives.

The cargo door of his C-5 blew out at 23,000 feet. Facing rapid decompression and loss of many flight systems, the plane landed in a rice paddy at 270 knots saving the lives of over 170 Vietnamese orphans bound for the United States.

General Paul Carlton called it “One of the greatest displays of airmanship I have ever heard related.”

Flying the Jolly Green helicopter, he participated in a major combat and rescue operation on Koh Tang Island off the coast of Cambodia.

Under withering fire from a fanatical enemy, he made continued strafing runs and rescued numerous Marines in 14 hours of sustained combat.


The walls of the plaza are adorned with plaques honoring Academy graduates who earned some of the Air Force's highest awards for their service in the Southeast Asia conflict. These include the Air Force Cross, the Silver Star, the Purple Heart, the Distinguished Flying Cross, and Bronze star with "V." 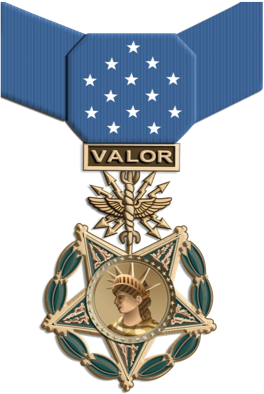 The Medal of Honor is the nation’s highest and most prestigious personal military decoration. It is awarded to recognize U.S. military service members who distinguished themselves by acts of valor. The Class of 1965 partnered with the Class of 1970 to construct the north wall of the Plaza to honor the Academy's only Medal of Honor recipient — Captain Lance Sijan. 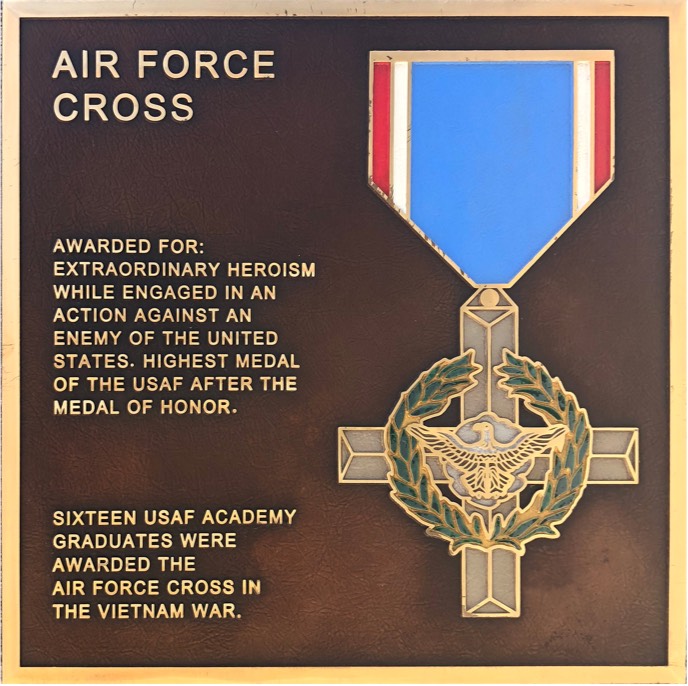 Awarded for extraordinary heroism while engaged in action against an enemy of the United States. Highest medal of the USAF after the Medal of Honor. Sixteen USAF graduates were awarded the Air Force Cross in Vietnam. 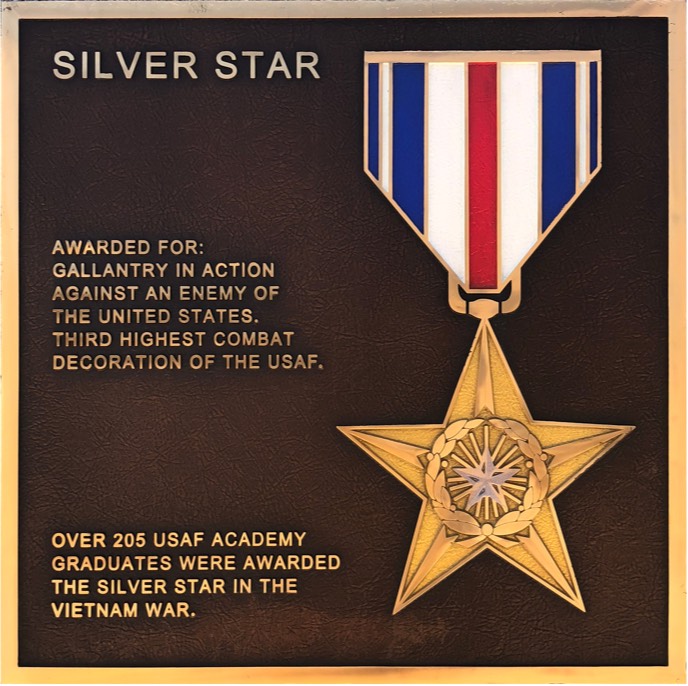 Awarded for gallantry in action against an enemy of the United States. Third highest combat decoration of the USAF. Over 205 USAF Academy graduates were awarded the Silver Star in Vietnam.

Awarded for heroism or extraordinary achievement while participating in an aerial flight. Fourth highest combat decoration of the USAF. Over 2,100 USAF Academy graduates were awarded the Distinguished Flying Cross in the Vietnam War.

Awarded for heroic or meritorious achievement or service. “V” for heroism in combat. Fifth highest combat decoration of the USAF. Over 55 USAF Academy graduates were awarded the Bronze Star with “V” device in the Vietnam War.

Awarded for being wounded or killed in any action against an enemy of the United States or as a result of an act of an enemy or opposing force. Over 280 USAF Academy graduates were awarded the Purple Heart in the Vietnam War.

Awarded for single acts of heroism or meritorious achievement while participating in aerial flight. Over 3,200 USAF graduates were awarded the Air Medal in the Vietnam War.