These classmates ran the Hood to Coast Relay (133 miles) and raised over $60,000 for cancer research.

We Were Pilots Once, And Young.

At the end of Hell Week in May 1967, Bill Manning yelled the infamous words, “It’s a screw job Seventy!” They signaled the start of a major melee between the men of  ’70 and their Upperclassman. Punches were thrown and Recognition was threatened.

Those words became the unofficial motto for the Class.

His first words to the cadet wing:

“If you don’t beat Army tomorrow, you don’t have a hair on your ass.”

The Class of 1970 is known as the “Heritage Class. Over the years it has funded numerous projects to honor the legacy of Academy graduates. Its first project at its tenth Reunion was funding the bar at Doolittle Hall. The Class dedicated the bar to nine of its classmates who lost their lives in Southeast Asia.

The Class of 1970 funded ($2.5M), designed, and oversaw the construction of the Southeast Asia Memorial Pavilion and Plaza of Heroes located on The Heritage Trail at Doolittle Hall. The centerpiece of the Pavilion is a large map of Southeast Asia sculpted by Jim Nance, ’71. Interactive screens that capture the history of the war, graduate accomplishments, personal stories, and those graduates who made the ultimate sacrifice were added in 2014.

The Class of 1970 Gift Committee, Gary Dahlen, Mike Torreano, Curt Emery, and Dick Rauschkolb developed the idea of building a Southeast Memorial in 2003. The original concept was to build a black granite wall similar to the Vietnam Wall in Washington DC. The names of the over 150 graduates killed in action would be on the wall. The Gift Committee visited potential sites for the wall and were most impressed with the breathtaking view from its present location. The Committee then expanded their concept to include building a pavilion. With assistance from the Association of Graduates, they developed a fundraising plan. Their goal was to raise all the money from their classmates. Members of the Gift Committee embarked on a major mailing and phoning campaign to raise the necessary funding—over $1M.

Initial financial support from classmates and the Association of Graduates, allowed them to work with Duane Boyle, the Academy architect, to develop a design that met the strict Academy architectural rules. Duane’s design of the Pavilion won a national award. At the same time, the Gift Committee solicited RFIs from companies interested in the project. The committee selected GH Phipps for the construction of the Pavilion. Despite many bureaucratic obstacles, the Gift Committee raised all of the funds from classmates. Keystone donors were:

The SEA Memorial Pavilion was dedicated on 1 October 2010 during the Class’ 40th Reunion. The Academy Superintendent, Lieutenant General Mike Gould ‘76 was the guest speaker.

After the dedication, the Gift Committee made the decision to place interactive screens in the Pavilion. They wanted to capture the history of major Air Force operations, graduate stories, sacrifices, and accomplishments. Locations depicted on the SEA map are explained on the two interactive touch screens on either side of the map, along with the history of air operations, and information about graduates who were Killed in Action or were Prisoners of War.

Prior to the Class’ 45th Reunion in 2015, the Gift Committee decided to build the Plaza of Heroes to recognize exceptional acts of valor during the war. The Committee again raised funds ($1.5M) from classmates to build the Plaza. This historic project complements the SEA Memorial Pavilion and is located adjacent to the Pavilion. The Class of 1965 partnered with the Class of 1970 to construct the north wall of the Plaza to honor the Academy’s only Medal of Honor recipient – Captain Lance Sijan. The Class of ’70 Gift Committee oversaw the construction of the remainder of the Plaza, which includes an open area for promotions, retirements, cadet classes and small reunion events. Most importantly, The Plaza memorializes the significant valor of graduates who earned the Air Force Cross, Silver Star, Purple Heart, and other distinguished combat awards.

The Plaza was dedicated on 6 November 2015 at the Class’ 45th Reunion. Almost all the Air Force four star generals were in attendance and General Mark Welsh ’76, the Chief of Staff of the Air Force, was the guest speaker. A highlight of the ceremony was the flyover of the last four F-4s in the Air Force inventory.

This website is the ‘70 Class Gift Committee’s latest project. Its goal is to provide information about the Heritage Trail to cadets, researchers, and the general public. Our major focus is to recreate the information contained at the Southeast Memorial Pavilion and Plaza of Heroes. We also want to capture a lot of information and stories that could not be placed in the Pavilion. We are actively seeking additional graduate stories, videos, and photographs for this website.

While the Class of 1970 heritage projects chronicle the Southeast Asian War as their members lived it, it also records for history, how Academy graduates rose to the challenges they faced. Why does the Class of 1970 want you to see this? It’s because, as Billy Graham said, “Courage is contagious.” We want today’s cadets to “catch that contagion”. We want them to know that courage is resistance to fear, not an absence of fear. We want them to absorb the lessons that we learned the hard way, so that they enter the Air Force with a warrior ethos born of the heritage of graduate veterans of the Vietnam conflict. The Class of 1970, The Long Blue Line, and the nation are counting on them! 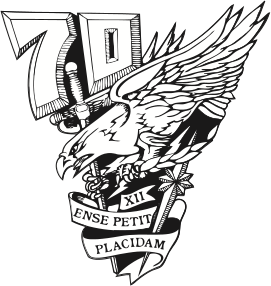